After a positive result, the cup is fused into the altar, and the blood in it becomes pure stone: you will have to look for a new altar. There are four of them in the fortress, so try to get the names of the associates from the living heretic: there can be many more of them.

How to make the Heretic talk 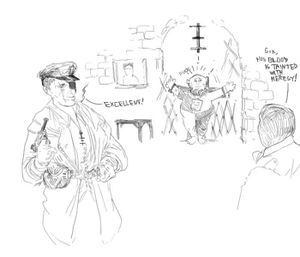 Typical ways to make them talk for those who are not gifted with imagination:

(remember that methods 1,2 and 3 lead to victim's loss of CHR - and enjoy)

If, after the performed actions, the conspirator or other suspect doesn't repent and doesn't immediately demand to bring him a confession paper, then perhaps the client needs a more personal approach.

The Inquisitor can use any mailbox to exchange SP for useful things. The list includes:

So, you made a new friend.

If the heretic only praises Chernobog with his gibberish:

Inquisitor's Acolytes. Sometimes, not only idiots appear in this position, however, don't put much hopes on it.

How to handle the Baron

On one hand, he is not your boss, you do not answer to him - and you represent a much more powerful force. On the other hand, a whole squad of well-armed loyal people is behind this person. Common sense will help you. And Baron has the right to expand your powers - which gives you additional support points and allows you to open almost all of the doors in the fortress.

How to handle the Bishop

And this one here is your boss. Useless in battle, corrupt, gold-loving... But if you do not kiss his feet, then you're not worthy enough to be called the Inquisitor. Also, the Bishop can reward you with Support Points and provide with Holy Water.

How to handle the Tribunal

In general, they are on your side. You both work in the name of the King. However, in case of storming the fortress, the Ordinators can be quite cocked - handle the negotiations with your shield turned on and offer them the peace pipe.

"The First Law" by Joe Abercrombie, whose Inquisition became the prototype of our masters of interrogation.

Retrieved from "https://lfwb.ru/index.php?title=Inquisitor_and_Practicii&oldid=1813"
Difference between revisions of "Inquisitor and Practicii" :