Fient (Feint). RMB performs a feint on the target. Makes the enemy parry prematurely, opening him for a real attack. A bad idea if the enemy is not alert or isn't planning to parry.

Defense. Increases your reaction - parry and dodge, makes it possible to counterattack. Price: slows down movement, weakens your attack, increases vulnerability to feints.

Dual (Dual). RMB strikes a target with a weapon in your secondary hand. Price: reduced accuracy.

Guard (Guard). Use RMB in combat mode to automatically attack anyone who approaches you. A shooting weapon allows you to target any tile in vision.

Reckless Attack (Fury). RMB will deal a reckless blow. The target will experience a penalty for dodging and parrying this attack, and the delay between your attacks will be lower. Price: attacks are conducted with -2 to the STR. 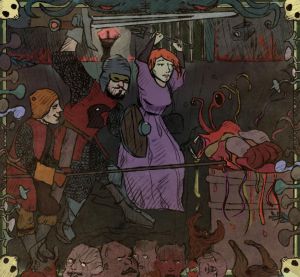 Strong attack (Strong). RMB deals a powerful blow. The damage roll will use the highest number based off your character's STR. Price: quickly leads to fatigue.

Energy shields brought the cold steel back to the north, although they're pretty rare and expensive.

The most vulgar kind of murder is an open attack in the middle of the street. Here, the interesting plot, and your own safety quickly dissolve and the chances of you succumbing to wounds or revenge rise quickly.

Retrieved from "https://lfwb.ru/index.php?title=How_to_Fight&oldid=1914"
How to Fight :